Brina is a Slovenian artist who, under the alias of SimsBerrry, creates machinimas with The Sims 4 (2014). Long before accidentally discovering machinima on YouTube, she had become an active writer looking for a visual medium to display her work. She became very interested in machinima after realising how accessible it was for everyone regardless of their financial situation and filmmaking/animation knowledge. Brina was already an active The Sims 4 player and although she began to make machinimas in 2014, it was not until a year later with her first series, Take a Shot (2015-2018), that she started to show them to the public. Both viewers and the very welcoming machinima community – particularly the friends she has made within this – are her main motivation to keep going.

Keen on experimenting with new challenges and genres, Brina has already made a wide variety of machinimas, from romance dramas like H.O.P.E (2015), to post-apocalyptic series like The Kenopsia Effect (2017-). For Brina, it is very important to be innovative and create series that she would watch herself, exploring the characters and their personalities without being limited to what the game can do at first glance. She has gained recognition within The Sims machinima community and by the videogame publisher, Electronic Arts:

I was chosen as one of the top storytellers by EA for their Sims Spark’d Challenge for my machinima short My Dearest Daughter (2020). I also received many awards in SimsFilmFest, a machinima festival for sims directors by sims directors, with my machinimas H.O.P.E . (2015), The Forbidden Tale (2015), The Kenopsia Effect (2017-) and Retrouvailles (2018). 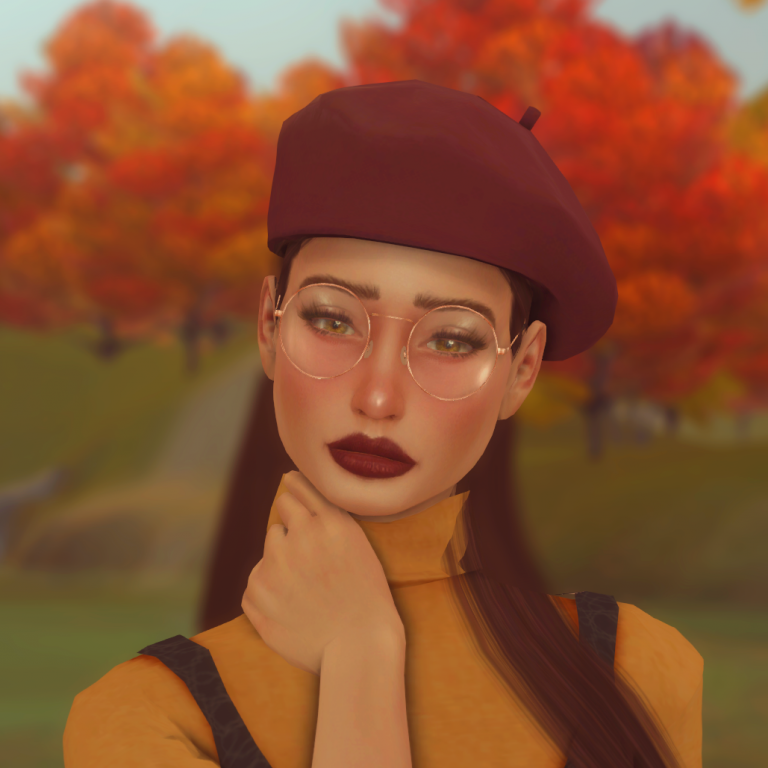 The Sims 4 and images of it are licensed property of Electronic Arts, Inc.

She has also collaborated with other machinima creators in multi-editor projects in which each participant films a few seconds of a music video, such as in Paralyzed (2017) hosted by Fall for Fiction, Walk Through The Fire (2017) hosted by TheWhiteDeer and Shiver (2017) hosted by herself. For Brina, The Sims machinima community has evolved as more practitioners engage with the creation of sophisticated visuals (by designing custom animations and special effects), and diverse characters and plots.

The creative process that Brina follows to create her works has evolved over the years, adopting tools and approaches which have led her to create her own custom animations. She begins with the character design, outlining their personalities, and slowly shapes the world and the plot in which they will appear. Later, she works with a script editor – Lizzy Plant – to finish the script, and contacts voice actors to record the lines. While waiting for the latter, she builds the sets and custom animations in Blender. It is not until she receives the lines from the voice actors that she starts filming within the game by capturing what is on the screen. Brina uses Reshade, Cheat Engine and a plethora of custom content to transform the aesthetics of the base game, and CyberLink PowerDirector and Audacity to edit the video and audio footage respectively. She recognises that although the game has a ‘cinematic camera mode’ – allowing players to hide the HUD and get full control of the camera movement, angles, and rotation – and some cheats that facilitate the filming process, she will not be able to make her machinimas without custom content and mods. In addition, the fact that she makes machinimas with The Sims 4 brings its own limitations, such as in the customisation of characters and sets, and the animations and camera movement to film action sequences and long-dialogue scenes. Nevertheless, she recognises that this is a small price to pay, as making machinimas is less time consuming than using 3D animation and modelling software to make animated films.

The Sims 4 and images of it are licensed property of Electronic Arts, Inc.